South Africa’s Bush war lasted over several decades. Some dispute the exact dates of this war. It is, however, safe to say that it was a serious war between the early 1970s to about 1990. The government passed a law that all white men were conscripted to serve in the military from the day they finish their school education up until about the age of forty or even later.

Those who chose to go to university first could do so. But after university training, you had to do your duty for your country. 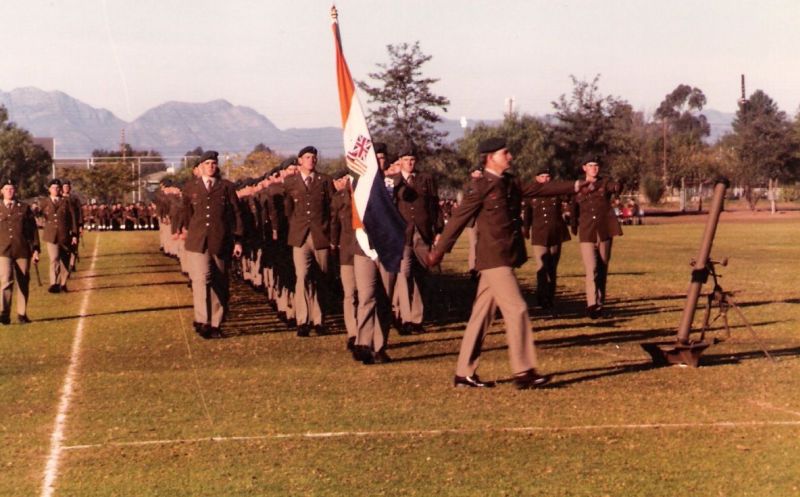 The logistics of it all entailed massive cooperation between the Department of Homeland Affairs and the Department of Defence. I was 15 years old when I received a letter informing me that I had to get a South African identity document.

I was surprised because normally you have to wait until you are 16 before you can get an “ID-book.” It is with hindsight that I realized that they had to get the boys lined up for military service.

Soon after I received my ID-book, my military force number followed. I still remember mine today: 80427677BA. The suffix, “BA,” was an indication that I was in the citizen-force, but have not been trained as yet. It changed to “BG” as soon I entered the South African Defence Force (SADF) as a National Serviceman, and afterward, it changed to “BT.”

If you dared to refuse to do your military service, the government jailed you. No one had a choice. You just had to do it. I know a few people who left the country not to do their military service. They could not return to South Africa for decades.

While the above was going on, the schools received a good dose of military propaganda. I believe that a lot of it was indeed true, but some of it was outright lies. At the time we could not discern what was true and what was not. While the Cold War between the West and the East was going on, Communism indeed threatened South Africa. They called it the “Red Threat.”

North of South Africa were communists in Angola, Zambia, Zimbabwe, and Mozambique. The South African government banned the African National Congress (ANC). The ANC smuggled AK47 assault rifles, landmines, and other explosive devices into South Africa for their “armed struggle.”

We called it “terrorism.”

In 1982, two landmines exploded in the Limpopo Valley. The first one blew up on our farm, Bergen-op-Zoom, as a military vehicle, a “Buffel,” drove over it. My father was following right behind this vehicle in his Toyota Landcruiser. He had a lucky escape. A few hours later the second landmine exploded. The neighbor’s utility truck drove over it on their farm, Amersham. The bomb killed three adult women and a baby. The children sitting in the load bay were hurt but survived.

I finished school a few months later, and on January 13, 1983, I entered the 1 South African Infantry Battalion (1SAI) in Bloemfontein. I was in Oscar Company.

I was 1.87 meters tall (6 ft 2½”) and weighed 63 kilograms (139 pounds). I was so skinny that the wind could blow me over. Three months later, I weighed 78 kilograms. The commanding officer selected me to do an officer’s course at the Mechanized Leader Wing (MLW).

A few weeks after the officer’s course started, the ANC exploded what would later be called “the Pretoria bomb.” It killed many civilians. We Pretoria-men queued at the payphone to call home and hear if anyone was hurt.

Before I could finish my officer’s course, I broke my leg, and the powers in the medical corps had me medically reclassified. I returned to my unit ashamed and frustrated. I became a pen pusher – an administrative clerk.

The SADF launched Operation Askari in Angola in December 1983. Meanwhile, I was at the Personnel Services School in Pretoria for training. On December 31, 1983, my old Oscar Company lost a fire group in the Battle of Cuvelai. The same fire group they assigned me to during my basic training. A mortar landed in the Buffel and killed everyone except the driver. The vehicle was turned over, and the driver crawled out at the top hatch. As he made his exit, he crawled past the decapitated head of one of our comrades.

My one friend lost his head and the other his mind.

I eventually joined my friends in 61 Mechanized Battalion Group (61Mech) in June 1984 and cleared out of the army in December 1984. My two-year stint was over, and my adult life could start. I had high expectations and looked forward to studying at university.

I later did some “camps” in the citizen force, but was transferred to the Air Force and into the National Archive as I served in a civilian capacity, programming software for military aircraft.

I do not have any regrets for having been in the South African Army. It is part of who I am today. Many of my friends who survived Operation Askari have Post Traumatic Stress Disorder (PTSD) and cannot talk about their experiences. One called the SADF’s medical corps “criminally incompetent” as they did very little to help the men with PTSD.

During my time in the SADF, I was pushed to go beyond what I thought I would be capable of doing. I learned a basic discipline and order which benefits me today. The lessons learned were valuable.

I am saddened to see the men who still suffer today because of what we went through. When I look at how the ANC has been running South Africa since 1994, I wonder if it was worth it all.

Many were maimed physically and psychologically, and many still hate their former enemy. The peace they fought for never came. Another negotiated peace came, which does not fit the expectations we all had. Some can accept it, others not.

Presently we are not a communist country, and that was what we were conscripted for in the first place. The only problem I experience today is that I live with first-world expectations in a third-world country.