I love cats. I still miss our old Jeremiah dearly today, even though he has been gone several years now. His absence has left a void in our hearts and home.

But with neither cat nor dog living in our yard, wildlife has made its return with a vengeance, from gentle doves to noisy sparrows, minas, colies, hadedas, geckos, lizards, and much more. And, occasionally, a cat roaming the suburbs.

Our next-door neighbour's black cat would get into a tree and onto the three-meter high perimeter wall, and then give distress calls to his mummy. I do not mind him walking through our yard or sitting on the wall, but at one AM in the morning, the distress calls can be annoying. I suspect he is from Brakpan if I have to judge him by his attitude and the "dropped suspension" when he walks. 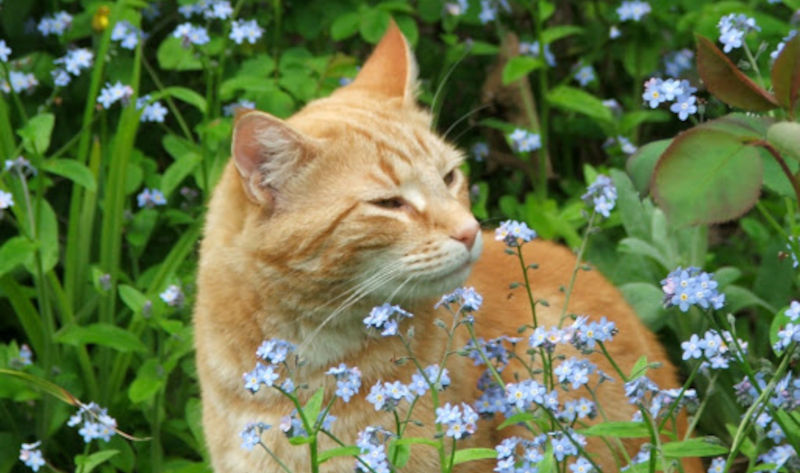 Then there is the proud ginger cat who would honour us with his presence from time to time. He would walk in our garden and sniff here and there to inspect what we do with the property he deems to be his own.

I call him Mr Ginger.

Our first fleeting glimpse of Mr Ginger frightened us. He was there, and then he was gone! Was that our old Jeremiah's ghost? We laughed at ourselves and told each other that we should get another cat again.

Mr Ginger's visits became more frequent, and I would not mind as long as he only roamed the yard. Jeremiah also roamed the neighbourhood and was shot twice with a pellet gun. The last time gave him a setback and he never really recovered from it. Eventually, his kidneys malfunctioned, and he laid down nine lives to go to Cat Heaven.

Mr Ginger became bolder every week and at last, entered our house. It was an invasion I could not allow. The first time he must have come through the mudroom, jumped the stable door and fled into the garage when he heard us approach.

He was still in the garage when I stood in the scullery. In one quick and smooth motion, he brushed past me and jumped through the scullery window. Once on the paving outside, he proudly walked away, stopped, looked over his right shoulder at me with his tail erect. "So what can you do about that?" he seemed to ask.

About a week later, my wife heard a cat's distress calls in the garage. She opened the roll-up doors with remote control, and Mr Ginger made his exit with haste. She opened the door between the garage and the house, and an odour told us that Mr Ginger was trapped the whole night without the luxury of a sandbox. It was a mess.

For his next visit, he must have entered through the scullery window. The previous evening we forgot to pack some food away, and Mr Ginger helped himself to some chicken wings and thighs. He ate on the floor and left clean-picked bones as a visité card. I cleaned up after him and undertook to put an end to his invasions. But no, I would not do it with a pellet gun. I have far too much respect for a gentleman of his stature.

Cats are intelligent and can be taught. So I waited, and I closed the scullery window as I knew he would probably use it again. The opportunity presented itself last night.

It was around midnight, and I was sitting on the patio behind my computer with a headset on, watching a YouTube video. The security door was closed, but the glass door was open. It is summer here with night temperatures above 25 degrees Celcius. I noticed a movement to the right of me and saw that Mr Ginger was on his way to the kitchen again. He entered through the security door, walked right past me, and did not see this human behind the computer.

I roared a loud "Hey!" while stripping the headset and my glasses off in one swift movement. Mr Ginger turned right and ran for the scullery to swoop through the window again. I was behind him and reached him in time to witness his nose pressed against a closed window.

I expected sharp nails and teeth coming to his defence, but none of those were there. He was still a gentleman, I realised. I grabbed him by the skin of his back and his neck and carried him to the patio. I held him at arm's length while unlocking the security gate. He was complaining a little at being treated in such an undignified manner.

Out on the deck, I flung him into the swimming pool and heard the splash. Now I know some would think I tried to drown him, but that is not the case. Adult cats may hate water, but are able swimmers. It seemed as if he was walking on water! Before you could say glug-glug-drown, Mr Ginger was out and disappeared into the shadows. From the time he invaded our house to where he left it again, took no longer than one minute.

I watched him leave, wetter but much wiser. I am going to miss this gentleman, I know, but will probably not see him again. It is sad, but I would rather scare him away than having him explore further to where a boy with a pellet gun shoots at him.